Congenital plasminogen deficiency is a disorder that results in inflamed growths on the mucous membranes, which are the moist tissues that line body openings such as the eyelids and the inside of the mouth. Development of the growths are usually triggered by infections or injury, but they may also occur spontaneously in the absence of known triggers. The growths may recur after being removed.

Congenital plasminogen deficiency most often affects the conjunctiva, which are the mucous membranes that protect the white part of the eye

People with congenital plasminogen deficiency may also develop ligneous growths on other mucous membranes, including the inside of the mouth and the gums; the lining of the nasal cavity; and in females, the vagina. Growths on the mucous membranes that line the gastrointestinal tract may result in ulcers. The growths may also develop in the windpipe, which can cause life-threatening airway obstruction, especially in children. In a small number of cases, affected individuals are born with impaired drainage of the fluid that surrounds and protects the brain and spinal cord (the cerebrospinal fluid

or CSF), resulting in a buildup of this fluid in the skull (occlusive hydrocephalus). It is unclear how this feature is related to the other signs and symptoms of congenital plasminogen deficiency.

The prevalence of congenital plasminogen deficiency has been estimated at 1.6 per one million people. This condition is believed to be underdiagnosed, because growths in one area are often not recognized as being a feature of a disorder that affects many body systems. Mild cases likely never come to medical attention.

and is important for wound healing, creating the framework for normal tissue to grow back. Excess fibrin is broken down when no longer needed, and the new, more flexible normal tissue takes its place.

A reduction in functional plasminogen results in less plasmin to break down fibrin, leading to a buildup of fibrin. The excess fibrin and the resulting inflammation of the tissue result in the inflamed woody growths characteristic of congenital plasminogen deficiency.

It is unclear why the excess fibrin builds up in the mucous membranes but does not usually result in abnormal clots in the blood vessels (thromboses). Researchers suggest that other enzymes in the blood may also break down fibrin, helping to compensate for the reduced plasminogen levels.

Learn more about the gene associated with Congenital plasminogen deficiency 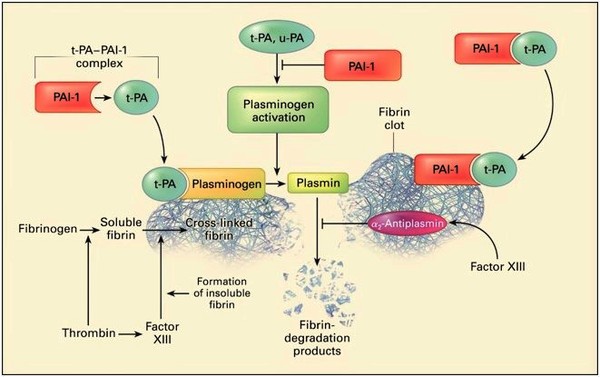