You Are Here:
Home →
Genetics →
Genetic Conditions →
Congenital deafness with labyrinthine aplasia, microtia, and microdontia
URL of this page: https://medlineplus.gov/genetics/condition/congenital-deafness-with-labyrinthine-aplasia-microtia-and-microdontia/

Congenital deafness with labyrinthine aplasia, microtia, and microdontia (also called LAMM syndrome) is a condition that affects development of the ears and teeth. In people with this condition, the structures that form the inner ear

are usually completely absent (labyrinthine aplasia). Rarely, affected individuals have some underdeveloped inner ear structures in one or both ears. The abnormalities of the inner ear cause a form of hearing loss called sensorineural deafness that is present from birth (congenital). Because the inner ear is important for balance as well as hearing, development of motor skills, such as sitting and crawling, may be delayed in affected infants. In addition, people with LAMM syndrome often have abnormally small outer ears (microtia

LAMM syndrome is a rare condition, although its prevalence is unknown. Approximately a dozen affected families have been identified.

LAMM syndrome is caused by mutations in the FGF3 gene, which provides instructions for making a protein called fibroblast growth factor 3 (FGF3). By attaching to another protein known as a receptor, the FGF3 protein triggers a cascade of chemical reactions inside the cell that signal the cell to undergo certain changes, such as dividing or maturing to take on specialized functions. During development before birth, the signals triggered by the FGF3 protein stimulate cells to form the structures that make up the inner ears. The FGF3 protein is also involved in the development of many other organs and structures, including the outer ears and teeth.

FGF3 gene mutations involved in LAMM syndrome alter the FGF3 protein. The altered protein likely has reduced or absent function and is unable to stimulate signaling. The loss of FGF3 function impairs development of the ears and teeth, which leads to the characteristic features of LAMM syndrome.

Learn more about the gene associated with Congenital deafness with labyrinthine aplasia, microtia, and microdontia 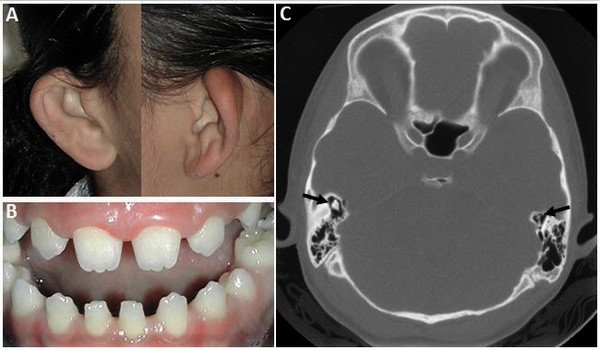