rhythm (arrhythmia). As the heart rate increases in response to physical activity or emotional stress, it can trigger an abnormally fast heartbeat called ventricular tachycardia. Episodes of ventricular tachycardia can cause light-headedness, dizziness, and fainting (syncope). In people with CPVT, these episodes typically begin in childhood.

If CPVT is not recognized and treated, an episode of ventricular tachycardia may cause the heart to stop beating (cardiac arrest), leading to sudden death. Researchers suspect that CPVT may be a significant cause of sudden death in children and young adults without recognized heart abnormalities.

CPVT most commonly results from mutations in two genes, RYR2 and CASQ2. RYR2 gene mutations cause about half of all cases, while mutations in the CASQ2 gene account for up to 5 percent of cases. Mutations in other genes are rare causes of the condition.

The RYR2 and CASQ2 genes provide instructions for making proteins that help maintain a regular heartbeat. For the heart to beat normally, heart muscle cells called myocytes must tense (contract) and relax in a coordinated way. Both the RYR2 and CASQ2 proteins are involved in the movement of calcium within myocytes, which is critical for the regular contraction of these cells.

Mutations in either the RYR2 or CASQ2 gene disrupt the handling of calcium within myocytes, which interferes with the coordination of contraction and relaxation of the heart, particularly during exercise or emotional stress. Impaired calcium regulation in the heart can lead to ventricular tachycardia in people with CPVT.

Similarly, other genes involved in CPVT play roles in calcium regulation in myocytes. Mutations in these genes also disrupt the normal movement of calcium inside these cells, impairing the coordination of heart beats.

When CPVT results from mutations in the RYR2 gene, it follows an autosomal dominant inheritance pattern, which means one copy of the altered gene in each cell is sufficient to cause the disorder. In about half of cases, an affected person inherits an RYR2 gene mutation from one affected parent

in the RYR2 gene that occur during the formation of reproductive cells (eggs or sperm) in an affected individual's parent or in early embryonic development. These cases occur in people with no history of the disorder in their family.

When CPVT is caused by mutations in the CASQ2 gene, the condition almost always has an autosomal recessive pattern

When caused by mutations in other genes, CPVT can be inherited in an autosomal dominant or autosomal recessive pattern. 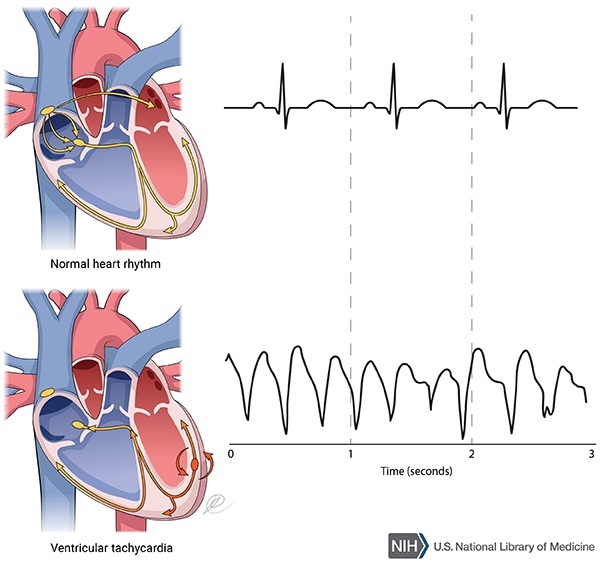