Cantú syndrome is a rare condition characterized by excess hair growth (hypertrichosis), a distinctive facial appearance, heart defects, and several other abnormalities. The features of the disorder vary among affected individuals.

People with Cantú syndrome have thick scalp hair that extends onto the forehead and grows down onto the cheeks in front of the ears. They also have increased body hair, especially on the back, arms, and legs. Most affected individuals have a large head (macrocephaly

) and distinctive facial features that are described as "coarse." These include a broad nasal bridge, skin folds covering the inner corner of the eyes (epicanthal folds

), and a wide mouth with full lips. As affected individuals get older, the face lengthens, the chin becomes more prominent, and the eyes become deep-set.

Many infants with Cantú syndrome are born with a heart defect such as an enlarged heart (cardiomegaly) or patent ductus arteriosus (PDA). The ductus arteriosus is a connection between two major arteries, the aorta

and the pulmonary artery. This connection is open during fetal development and normally closes shortly after birth. However, the ductus arteriosus remains open, or patent, in babies with PDA. Other heart problems have also been found in people with Cantú syndrome, including an abnormal buildup of fluid around the heart (pericardial effusion

) and high blood pressure in the blood vessels that carry blood from the heart to the lungs (pulmonary hypertension).

Additional features of this condition include distinctive skeletal abnormalities, a large body size (macrosomia) at birth, a reduced amount of fat under the skin (subcutaneous fat) beginning in childhood, deep horizontal creases in the palms of the hands and soles of the feet, and an increased susceptibility to respiratory infections. Other signs and symptoms that have been reported include abnormal swelling in the body's tissues (lymphedema

), side-to-side curvature of the spine (scoliosis

Cantú syndrome is a rare condition. About three dozen affected individuals have been reported in the medical literature.

Cantú syndrome results from mutations in the ABCC9 gene. This gene provides instructions for making one part (subunit) of a channel

that transports charged potassium atoms (potassium ions) across cell membranes. Mutations in the ABCC9 gene alter the structure of the potassium channel, which causes the channel to open when it should be closed. It is unknown how this problem with potassium channel function leads to excess hair growth, heart defects, and the other features of Cantú syndrome.

Learn more about the gene associated with Cantú syndrome

This condition is inherited in an autosomal dominant pattern, which means one copy of the altered ABCC9 gene in each cell is sufficient to cause the disorder.

Most cases result from new mutations in the gene

and occur in people with no history of the disorder in their family. In a few reported cases, an affected person has inherited the mutation from one affected parent 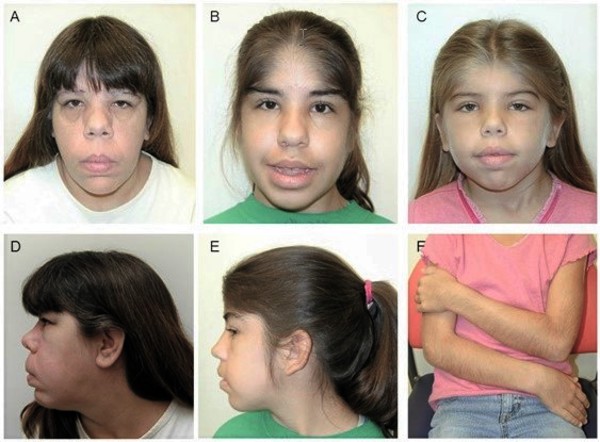