disorder that most often occurs in babies. Excessive new bone formation (hyperostosis) is characteristic of Caffey disease. The bone abnormalities mainly affect the jawbone, shoulder blades (scapulae), collarbones (clavicles), and the shafts (diaphyses) of long bones in the arms and legs. Affected bones may double or triple in width, which can be seen by x-ray imaging. In some cases two bones that are next to each other, such as two ribs or the pairs of long bones in the forearms (radius and ulna) or lower legs (tibia and fibula) become fused together. Babies with Caffey disease also have swelling of joints and of soft tissues such as muscles, with pain and redness in the affected areas. Affected infants can also be feverish and irritable.

The signs and symptoms of Caffey disease are usually apparent by the time an infant is 5 months old. In rare cases, skeletal abnormalities can be detected by ultrasound imaging during the last few weeks of development before birth. Lethal prenatal cortical hyperostosis, a more severe disorder that appears earlier in development and is often fatal before or shortly after birth, is sometimes called lethal prenatal Caffey disease; however, it is generally considered to be a separate disorder.

For unknown reasons, the swelling and pain associated with Caffey disease typically go away within a few months. Through a normal process called bone remodeling, which replaces old bone tissue with new bone, the excess bone is usually reabsorbed by the body and undetectable on x-ray images by the age of 2. However, if two adjacent bones have fused, they may remain that way, possibly resulting in complications. For example, fused rib bones can lead to curvature of the spine (scoliosis

) or limit expansion of the chest, resulting in breathing problems.

Most people with Caffey disease have no further problems related to the disorder after early childhood. Occasionally, another episode of hyperostosis occurs years later. In addition, some adults who had Caffey disease in infancy have other abnormalities of the bones and connective tissues, which provide strength and flexibility to structures throughout the body. Affected adults may have loose joints (joint laxity), stretchy (hyperextensible) skin

, or be prone to protrusion of organs through gaps in muscles (hernias

Caffey disease has been estimated to occur in approximately 3 per 1,000 infants worldwide. A few hundred cases have been described in the medical literature. Researchers believe this condition is probably underdiagnosed because it usually goes away by itself in early childhood.

A mutation in the COL1A1 gene causes Caffey disease. The COL1A1 gene provides instructions for making part of a large molecule called type I collagen. Collagens are a family of proteins that strengthen and support many tissues in the body, including cartilage, bone, tendon, and skin. In these tissues, type I collagen is found in the spaces around cells. The collagen molecules are cross-linked in long, thin, fibrils that are very strong and flexible. Type I collagen is the most abundant form of collagen in the human body.

The COL1A1 gene mutation that causes Caffey disease replaces the protein building block (amino acid) arginine with the amino acid cysteine at protein position 836 (written as Arg836Cys or R836C). This mutation results in the production of type I collagen fibrils that are variable in size and shape, but it is unknown how these changes lead to the signs and symptoms of Caffey disease.

Learn more about the gene associated with Caffey disease

This condition is inherited in an autosomal dominant pattern, which means one copy of the altered gene in each cell is usually sufficient to cause the disorder. About 20 percent of people who have the mutation that causes Caffey disease do not experience its signs or symptoms; this phenomenon is called incomplete penetrance.

In some cases, an affected person inherits the mutation

that causes Caffey disease from a parent. Other cases result from new mutations in the gene 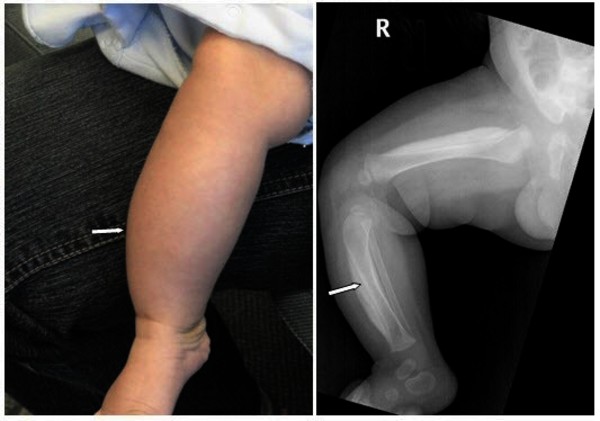