Au-Kline syndrome is a condition that affects many body systems. Individuals with this condition typically have weak muscle tone (hypotonia), intellectual disability, and delayed development. Speech is delayed in children with Au-Kline syndrome, and some are able to say only one or a few words or are never able to speak. In addition, affected children learn to walk later than usual, and some are never able to walk on their own.

Individuals with Au-Kline syndrome can have distinctive facial features, including long openings of the eyelids (long palpebral fissures), drooping eyelids (ptosis), and shallow eye sockets. Other common facial features in this condition include a broad nasal bridge, a mouth with the outer corners turned downward and often held in an open position, and a deep groove down the middle of the tongue. Less common abnormalities include premature joining of certain skull bones (craniosynostosis) in affected infants, an opening or unusually high arch in the roof of the mouth (cleft

), a split in the soft flap of tissue that hangs from the back of the mouth (bifid uvula

Malformations of the heart, blood vessels, kidneys, or bones can also occur in people with Au-Kline syndrome. For example, in some affected individuals, the large blood vessel that distributes blood from the heart to the rest of the body (the aorta) becomes weakened and stretched (aortic dilatation), which can be life-threatening. Some people with Au-Kline syndrome have an abnormal curvature of the spine (scoliosis). In addition, affected individuals may have difficulty feeding or poor vision.

Au-Kline syndrome is a rare condition with an unknown prevalence. At least 25 cases have been diagnosed.

Au-Kline syndrome is caused by mutations in the HNRNPK gene. The protein produced from this gene, called heterogenous nuclear ribonucleoprotein K (hnRNP K), attaches (binds) to DNA or its chemical cousin RNA and to other proteins, acting as a docking station for these molecules so they can interact. By bringing certain proteins together with DNA or RNA, the hnRNP K protein helps control the activity of genes and the production of proteins. By regulating certain genes and proteins, the hnRNP K protein plays a role in the normal development and function of several body systems, including the brain.

HNRNPK gene mutations that cause Au-Kline syndrome result in the production of little or no hnRNP K protein. A shortage of this protein alters gene activity and protein production, which disrupts the normal development or functioning of several body systems, resulting in the varied features of Au-Kline syndrome. In particular, problems with brain development likely contribute to intellectual disability, delayed development, and other neurological problems in people with the condition.

Learn more about the gene associated with Au-Kline syndrome

Most cases of this condition result from new (de novo) mutations in the gene that occur during the formation of reproductive cells (eggs or sperm) in an affected individual’s parent or in early embryonic development. These cases occur in people with no history of the disorder in their family. 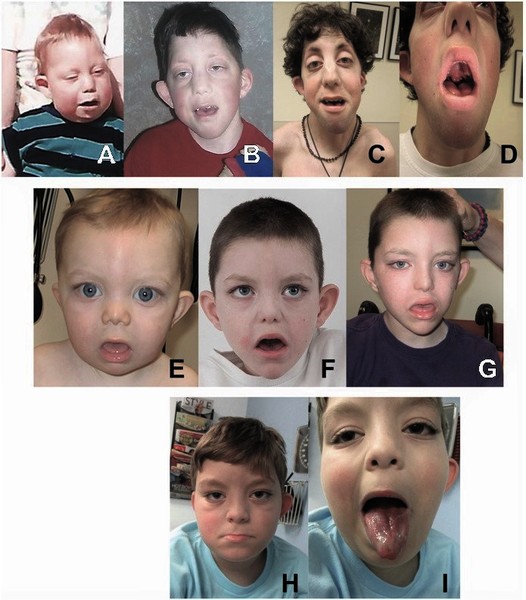