. These lesions are associated with destruction of the covering that protects nerves and promotes the efficient transmission of nerve impulses (the myelin sheath

) and damage to nerve cells. Multiple sclerosis is considered an autoimmune disorder; autoimmune disorders occur when the immune system malfunctions and attacks the body's own tissues and organs, in this case tissues of the nervous system.

Multiple sclerosis usually begins in early adulthood, between ages 20 and 40. The symptoms vary widely, and affected individuals can experience one or more effects of nervous system damage. Multiple sclerosis often causes sensory disturbances in the limbs, including a prickling or tingling sensation (paresthesia), numbness, pain, and itching. Some people experience Lhermitte sign, which is an electrical shock-like sensation that runs down the back and into the limbs. This sensation usually occurs when the head is bent forward. Problems with muscle control are common in people with multiple sclerosis. Affected individuals may have tremors, muscle stiffness (spasticity), exaggerated reflexes (hyperreflexia), weakness or partial paralysis of the muscles of the limbs, difficulty walking, or poor bladder control. Multiple sclerosis is also associated with vision problems, such as blurred or double vision or partial or complete vision loss. Infections that cause fever can make the symptoms worse.

Primary progressive MS is the next most common form, affecting approximately 10 to 20 percent of people with multiple sclerosis. This form is characterized by constant symptoms that worsen over time, with no clinical attacks or remissions. Primary progressive MS typically begins later than the other forms, around age 40.

An estimated 1.1 to 2.5 million people worldwide have multiple sclerosis. Although the reason is unclear, this condition is more common in regions that are farther away from the equator. In Canada, parts of the northern United States, western and northern Europe, Russia, and southeastern Australia, the condition affects approximately 1 in 2,000 to 2,400 people. It is less common closer to the equator, such as in Asia, sub-Saharan Africa, and parts of South America, where about 1 in 20,000 people are affected. For unknown reasons, most forms of multiple sclerosis affect women twice as often as men; however, women and men are equally affected by primary progressive MS.

. The HLA complex helps the immune system distinguish the body's own proteins from proteins made by foreign invaders (such as viruses and bacteria). Each HLA gene has many different normal variations, allowing each person's immune system to react to a wide range of foreign proteins. Variations in several HLA genes have been associated with increased multiple sclerosis risk, but one particular variant of the HLA-DRB1 gene, called HLA-DRB1*15:01, is the most strongly linked genetic factor.

The IL7R gene provides instructions for making one piece of two different receptor proteins: the interleukin 7 (IL-7) receptor and the thymic stromal lymphopoietin (TSLP) receptor. Both receptors are embedded in the cell membrane of immune cells. These receptors stimulate signaling pathways that induce the growth and division (proliferation) and survival of immune cells. The genetic variation involved in multiple sclerosis leads to production of an IL-7 receptor that is not embedded in the cell membrane but is instead found inside the cell. It is unknown if this variation affects the TSLP receptor.

Because the HLA-DRB1 and IL-7R genes are involved in the immune system, changes in either might be related to the autoimmune response

that damages the myelin sheath and nerve cells and leads to the signs and symptoms of multiple sclerosis. However, it is unclear exactly what role variations in either gene plays in development of the condition.

Learn more about the genes associated with Multiple sclerosis 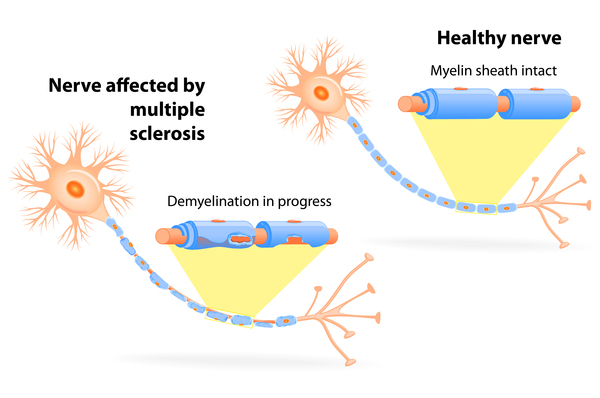